After the nuttiness of the Xmas period It's been good to get back into the studio. I had plans to close for about a month and totally relax. Relaxing is sooooo overrated and I found myself wandering Burns St way on the 29th of December! Ive put some new stock into the Most Marvellous. The haberdashery lady from the market has gone so Im now selling a few sewing bits and bobs as well as my clothing range. Ive also had some commissions to do, which I've finally finished. I've got some planning for projects to do but in the meantime find myself having free time to make some new clothes. This was a sample I tried this afternoon on a piece of linen I had. 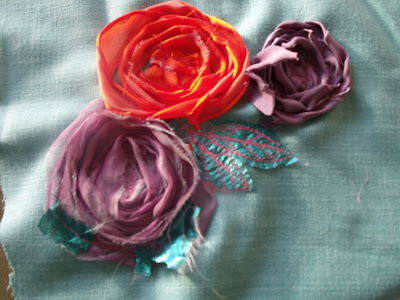 Im really pleased with how it turned out, the roses are all silk and Im planning to use this on a skirt with a bound edge and vintage scarf tie at the waist. Ive booked to do the Made It Market in Cambridge at Easter so have one eye on being well organised with some lovely new stock. We shall see..... 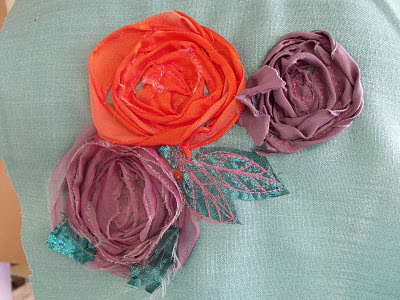 As I have no classes until Mid-Feb Ive had no pressure to keep things tidy which has resulted in a horrible chaotic mess visiting me when I wasn't looking. Sally "Bells and whistles" and I have been trying to screenprint Kirsty T-shirts. I haven't screenprinted for about 30 years but the sheer joy and pleasure was worth the wait- when we realised that it was perhaps a bit more difficult than it first appeared we left the stuff in the middle of the table while we got on with more pressing stuff (tea!) Then I visited the suppliers for a splurge, telling myself that I could sell purchases in the Most Marvellous- i did buy some funny things like rubber buttons and very old French ribbon with hikers and mountains on, so my visit was entirely justified. I've been spending all week sewing buttons onto cards. Now Im bored. 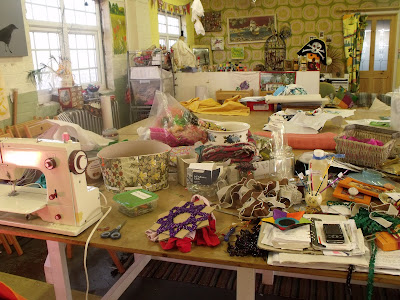 So then thought Id wrap ribbon around card, then got bored of that and decided to make some clothes. I blame the weather....it's too cold to think clearly. 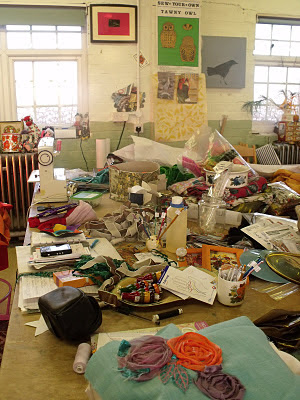 Now it's home time and someone's made a mess on the table.