Getting Back Into The Swing.

Ive been doing a lot of planning recently as well as writing new workshops. I've embraced 21st Century technology and added Paypal buttons to my website which enables people to book on classes straightaway. I'm pleased that it's actually working out well. The classes at My Little Vintage-where I teach only beginners and Intermediate tick along nicely. And Stitch and Bitch started agin this week after a long 2 months away. There was a definate frisson of excitement as folks caught up with each, happily everyone returned and we managed to squeeze in a couple of newbies as well. 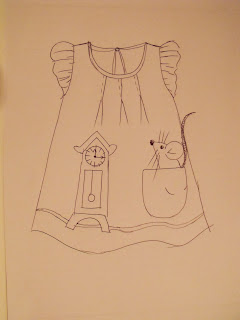 Two of the classes Ive planned are making an A Line Skirt with mushrooms on it. And A childs dress with a hickory, dickory dock motif and a mouse in the pocket. I thought that rather than photograph the pieces I would do some illistrations. I don't get to draw as often as I'd like. So found this childs dress a real pleasure. 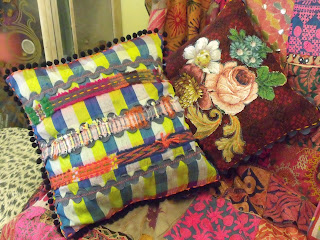 Finally, Im making stock for Landmark Arts which takes place in Teddingto across the first weekend in March. I've made a decision not to do Selvedge Spring fair this year and to try Landmark Arts instead. I had planned to make some kimono jackets last week but then decided to not buy any new fabrics and to use up trims I brought from raystitch and silks I'd had for years. I made some cushions, which Im happy with but feel I should've made something a bit more substantial. Which means Ill just have to make the kimono tops this week instead.
Posted by TheStitchandMakeStudio at 04:58